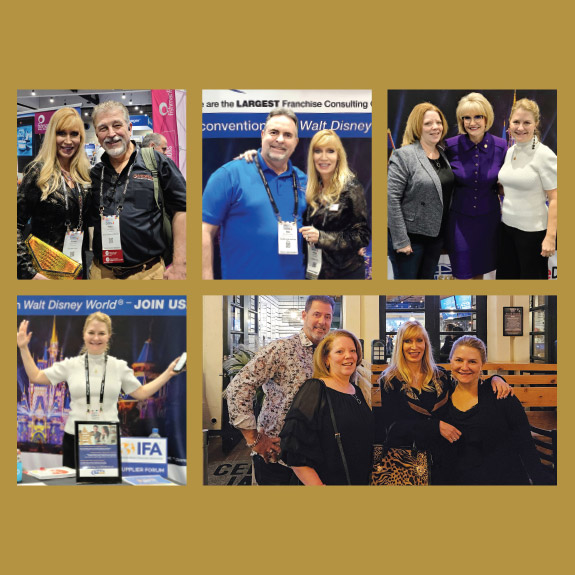 With the goal to work closely with entrepreneurs in local communities and the excitement of showcasing that “the franchise industry is open for opportunity,” President Matthew Haller of the International Franchise Association (IFA) kicked off the 62nd annual IFA Convention. By Cindy Charette

With the goal to work closely with entrepreneurs in local communities and the excitement of showcasing that “the franchise industry is open for opportunity,” President Matthew Haller of the International Franchise Association (IFA) kicked off the 62nd annual IFA Convention. FranServe, Inc. was well represented at the convention, which took place at the San Diego Convention Center from Feb. 26 through March 1, 2022, with the following leaders in attendance: CEO and President Alesia Visconti, Executive Vice President Rob Lancit, Vice President of Franchise Expansion Vicktoria Healy, and Director of Strategic Initiatives Michele Goitiandia.

Lancit said: “After two long years, the positive and upbeat atmosphere at this year’s IFA convention was infectious. It was great to hear from franchisors about the success they are experiencing in terms of growth. Franchising, across the board, is on an upward trajectory, and we should see tremendous growth over the next five to seven years.”

According to Nancy Williams, FranServe Franchise Consultant, the exhibit floor was filled with franchisors and suppliers who were excited to be gathering in person in beautiful San Diego. Williams attended the convention as the community relations chairperson of the IFA’s Black Franchise Leadership Council. The introduction of the council was announced during the IFA discussion session, which focused on diversity, equity, and inclusion.

Former NBA All-Star Shaquille O’Neal, one of the event’s keynote speakers, talked about entrepreneurship through franchising as a highly successful multi-unit owner of numerous franchises.

Like others who attended the convention, Williams said she felt inspired after hearing O’Neal speak. “In terms of engagement and having people understand how a former professional athlete views franchising so positively, this was very encouraging for the group. He talked about how he bridged his professional basketball career into business ownership – more from the perspective of having been in an environment where there was so much support – and translated that into why he loves franchising as an opportunity to get into business ownership,” she said.

Additionally, keynote speaker Vernice “FlyGirl” Armour, author, entrepreneur, and the U.S. Marine’s first African-American female combat pilot, shared how leaders from diverse backgrounds can help new business leaders by being a positive influence. Williams said she thought Armour was a phenomenal speaker and appreciated hearing messages about the experiences of women of color.

Goitiandia, who has been an integral part of FranServe since 2017, said: “As a first-time attendee at the IFA Convention, it was an awesome experience. I was finally able to actually shake hands with so many of my Zoom friends and meet so many new franchisors. Listening to Vernice Armour speak was both grounding and inspirational. Shaq was so motivating! I came away from this convention motivated to help FranServe move forward on so many levels.”

Since the conclusion of the convention, many have said they felt motivated to explore new franchising opportunities and are ready to accept all that the world of franchising has to offer.