Flatbread Grill®, the fast casual Mediterranean bakery and grill founded by the Esendemir Sisters in 2007, is now available as a franchise.

Flatbread Grill®, headquartered in the sisters’ hometown of Hoboken, NJ, will avail its franchise model to qualified operators interested in single or multi-location opportunities and regional territories all over the world.

“We built our concept out of a desire to help our sick parents. We had no idea it would take off the way it did, drawing customers from across all demographics,” she adds.

The sisters have fielded multiple franchise requests over the years for their concept. The strong brand identity, their worldwide social media following, their inspiring story about growing up in poverty, and proprietary recipes have drawn the attention of people from all walks of life.

Fusun, Gonca, and Arzu Esendemir, who become the first Turkish-American women in the world to start and expand a fast casual restaurant concept, built Flatbread Grill® entirely on their own. They developed the menu, brand identity, oversaw the buildout of their company stores, directed the operations, and did all of their marketing in-house.

“We wanted to take our time in expanding because we were truly building this business from nothing,” says Arzu Esendemir, who oversees business operations for the brand. “My sisters and I wanted to be absolutely certain that our business model was flawless before we invited other people along for the ride.”

The Esendemir Sisters bring not only their immense restaurant expertise to the franchise system, but they also bring their extreme resourcefulness. When the sisters opened their first Flatbread Grill® location back in 2008, they had no money to market the brand. Customers sought them out from day one and they landed an extraordinary review in the New York Times after being open for two months

“A big part of our appeal was the love that went into building the concept,” says Gonca Esendemir, who oversees marketing for the brand.
Flatbread Grill® is the only fast casual Mediterranean restaurant concept that not only serves a proprietary bread, but it is the only concept founded and operated by Turkish-American women. 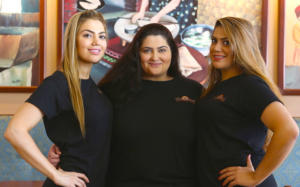