The technology divide between older and younger generations may not be as wide as you think. According to a recent survey of 1,000 seniors issued by Senior Helpers®, the nation’s premier provider of in-home senior care, more than 68 percent of people ages 65+ rate their technology skills either average or above average. The survey, which examined seniors’ attitudes on everything from apps and internet usage to social media habits, also found that while most would not consider themselves “tech-savvy” (71 percent), nearly 60 percent of seniors think younger generations underestimate their knowledge and aptitude for technology.

“Technology is constantly evolving, but seniors are much more adept at using tech than many people give them credit for,” said Peter Ross, CEO and co-founder, Senior Helpers. “It’s become integral to so many other aspects of their lives, they are embracing it.”

The study findings show that about 39 percent of seniors utilize technology to help them get things done more efficiently, while 31 percent embrace it as a matter of “pure survival.” Senior Helpers’ survey also highlights more about how senior citizens are using technology:

When asked what tech innovation they couldn’t live without, 29 percent of senior respondents reported a cell phone. Most (nearly 70 percent) use a smart phone, and 38 percent use an iPhone. However, 13 percent still don’t own a cell phone.

Thirty-two percent of seniors spend more than 20 hours a week on the internet, with 10 percent of those online for 40-plus hours per week.

When it comes to app usage, seniors use social media apps the most (almost 23 percent), followed by maps/navigation services (17 percent), online banking (14 percent) and games (8 percent).

When asked in a lighthearted way what movie best describes their relationship with technology, 28 percent of participants said Beauty and the Beast “because they had to warm up to it.” Another 28 percent noted Mission Impossible because they “can’t keep up.” Others likened it to Fight Club, admitting they “don’t like it but use it” (24 percent); or Cheaper by the Dozen, appearing to welcome technology (“Give me more gadgets!” at 19 percent).

Founded in 2001 with a vision to help seniors who wish to remain in their homes – despite age-related illnesses and mobility challenges – Senior Helpers serves elderly individuals and their families around the world. Senior Helpers differentiates itself with its proprietary, specialized programs that have been developed in collaboration with leading medical experts. The company was the first provider in the industry to offer specialized care services for individuals with Alzheimer’s, dementia and Parkinson’s disease. 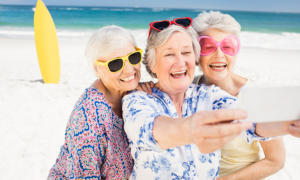 Senior Helpers is a premier in-home senior care provider in the U.S. with over 311 franchised businesses operating across the globe. Founded in 2001 with a vision to help seniors who wish to remain in their homes despite age-related illnesses and mobility challenges, Senior Helpers has now cared for tens of thousands of seniors with a pledge to provide “care and comfort at a moment’s notice.” Senior Helpers offers a wide range of personal care and companion services, including trained Alzheimer’s, dementia and Parkinson’s care, to assist seniors who wish to live independently. Learn more by visiting http://www.seniorhelpers.com.