CARROLLTON, Texas — FASTSIGNS International, Inc., franchisor of FASTSIGNS®, the leading sign, graphics and visual communications franchise, announced today it has been recognized by the Canadian Franchise Association (CFA) as a silver recipient of the 2019 Franchisees’ Choice Designation. FASTSIGNS has been recognized by the CFA for the seventh consecutive year for its strong relationship with Canadian franchisees, as well as extensive franchisee support and training.

“We pride ourselves on our high level of franchisee satisfaction in every country we operate in around the world and are honored to be recognized once again by the Canadian Franchise Association for this prestigious designation,” said Mark Jameson, EVP of Franchise Support and Development, FASTSIGNS International, Inc. “Systemwide, we have the highest support ratio the best of any sign and graphics franchise. As we continue to grow throughout Canada, we’ll continue to allocate a significant amount of resources to ensuring our franchisees — both existing and new — have access to top-notch training and support, and we’ll continue to nurture our strong franchisor-franchisee relationship that is so crucial to FASTSIGNS’ success.”

The Franchisees’ Choice designees are CFA member franchise systems who voluntarily took part in an independently-administered survey. Franchisees were asked to assess their franchisor in key areas of the franchise business model, including the franchisee selection process; franchisee information package; leadership; business planning and marketing; training and support; ongoing operations; and the relationship between the franchisor and franchisee.

“I’ve been with FASTSIGNS for more than twelve years, and the support I’ve received from the franchisor, in many aspects of my business, is fantastic. From strategic direction to marketing, along with vendor relations, technology and more, the tools and resources provided have continuously contributed to my center’s ongoing growth,” said Craig Gibbs, who opened a FASTSIGNS center in Scarborough, Ontario in 2007. “I am very satisfied with FASTSIGNS and am a proud advocate. I look forward to our combined efforts as we strive to grow the successful organization.”

FASTSIGNS currently has over 30 centers throughout Canada, including two recent openings in Ontario and additional centers slated to open in the coming months. The brand projects opening up to five new centers each year over the next several years and is actively seeking prospective franchisees throughout the country, including a Master Franchisee to develop in Quebec.

FASTSIGNS is known in the industry for equipping its franchisees with tools vital to securing the ongoing success of each individual location. In 2018, FASTSIGNS announced the launch of its partnership with 1HUDDLE, a workforce-training platform that converts unique training content into science-backed, quick-burst training games that are proven to accelerate workforce productivity. Additionally, FASTSIGNS announced the launch of a special incentive for first responders, including paramedics, emergency medical technicians, police officers, sheriffs, and firefighters, which includes a 50-percent reduction on the franchise fee — a savings of $23,750.

FASTSIGNS International, Inc. was ranked the #1 franchise opportunity in its category and 95 overall on Entrepreneur magazine’s 2019 Franchise 500®, the world’s first, best and most comprehensive franchise ranking. Acknowledged by entrepreneurs and franchisors as a top competitive tool of measurement, the Franchise 500® recognizes FASTSIGNS, the only sign, graphics, and visual communications franchise to be recognized in the top 100, for its exceptional performance in areas including financial strength and stability, growth rate, and brand power. FASTSIGNS also ranked #2 on this year’s Franchise Gator Top 100 list, ranking the best franchises for 2019. FASTSIGNS also has been ranked by Franchise Business Review as one of the “Best of the Best” for franchisee satisfaction for the last 10 years. Additionally, FASTSIGNS also was named to Franchise Business Review’s “Innovative Franchises” list in 2017 and a “Best-in-Category” franchise by Franchise Business Review in 2018. Last year, the Canadian Franchise Association (CFA) recognized FASTSIGNS International, Inc. with a special six-year Franchisees’ Choice designation for its strong relationship with Canadian franchisees, as well as extensive franchisee training and support. 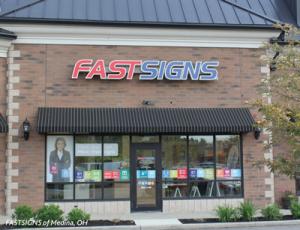 FASTSIGNS International, Inc. has been ranked the #1 franchise opportunity in its category in Entrepreneur magazine’s Franchise 500 for the third consecutive year and named Best-in-Category in the business services sector on Franchise Business Review’s list of the top franchises for 2018. In 2018, the Canadian Franchise Association (CFA) recognized FASTSIGNS International, Inc. with a special six-year Franchisees’ Choice designation for its strong relationship with Canadian franchisees, as well as extensive franchisee training and support.