Hofbräuhaus of America sets itself apart with its German dishes – and of course, beer!

Hofbräuhaus of America sets itself apart with its German dishes – and of course, beer! 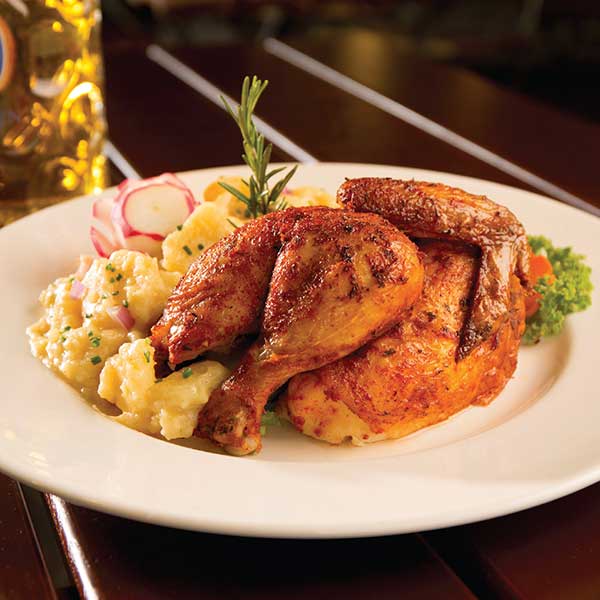 Featuring German food, lively music, a festive atmosphere – and its signature Hofbräu beer that has been brewing for more than four centuries, the Hofbräuhaus brand has been growing rapidly since becoming a franchise in America. By Rochelle Miller

Featuring German food, lively music, a festive atmosphere – and its signature Hofbräu beer that has been brewing for more than four centuries, the Hofbräuhaus brand has been growing rapidly since becoming a franchise in America.

“The way a Hofbräuhaus sets its cuisine apart from any competitors is the variety of many traditional German and especially Bavarian dishes,” explains Hofbräuhaus spokeswoman Celina Rieger Horsley. “Many of the food items – and the way they are prepared – you would only get to taste when you visit Germany.”

Described as “Bavaria at its best,” one of their signature dishes is Weisswürste, Munich’s famous white sausages made of veal and pork that are traditionally poached. The dish is served with a freshly-baked pretzel and sweet mustard. Another signature offering is Schweinebraten, a popular Munich dish that features pork roast topped with a dark beer sauce and dumplings.

The extensive menu includes something for everyone in the family-friendly restaurant. A children’s menu is characterized with a German twist, offering not only traditional chicken fingers but pork schnitzel fingers as well.

Complementing the dinner menu are desserts such as Apple Strudel and Black Forest Cake – and of course, an extensive list of Hofbräu beers.

The Hofbräu brand dates back to 1589, when Duke Wilhelm V of Bavaria founded a brewhouse in Munich. Today, the main brewery operation is still based in Munich, providing not only beer for the German market, but also exporting the brand to its franchises worldwide.

Among the business models offered to franchisees is a “brewpub” concept that includes an on-site brewery. In fact, six of the eight Hofbräuhaus locations open in the United States are brewpubs. It features a Bier Hall and Biergarten with a minimum seating capacity of 500 and boasts an estimated annual guest volume of over 250,000. While this large-scale concept requires the largest footprint and an estimated initial investment that starts at $5.7 million, there are multiple business models for different budgets. The “large restaurant” model features a similar seating capacity and comparable guest volume as the brewpub model, but the initial investment starts at $3.6 million and the beer is imported from Munich, Germany.

There is also a “small restaurant” model with a minimum seating capacity of 200 and a projected annual guest volume of 100,000+ with an approximate initial investment of $1.3 million. At the same time, a “Hofbräu Express”, a quick service concept, requires an initial investment starting at only $251,000.

“Signature dishes that are offered in every Hofbräuhaus franchise make the experience extraordinary,” said Rieger Horsley.

For more information about franchising opportunities with Hofbräuhaus of America, visit http://www.hofbrauhaus.us/franchise or call 702-389-3996.