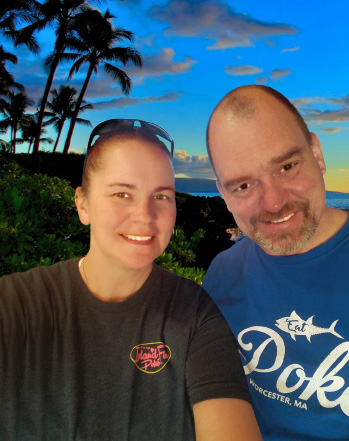 Prior to opening their dream restaurant, the Ways each came from very different backgrounds. Marilyn enjoyed a 25-year career as a bus driver for the local school district, and plans on returning once schools are back in session. Jim worked for 26 years in various finance and operational roles for a major office-supply company. By Cindy Charette

Bringing a taste of the Island so the City

Prior to opening their dream restaurant, the Ways each came from very different backgrounds. Marilyn enjoyed a 25-year career as a bus driver for the local school district, and plans on returning once schools are back in session. Jim worked for 26 years in various finance and operational roles for a major office-supply company. When he suddenly found himself unemployed, he took this as an opportunity to do something he had always wanted to do, which was to open his own business.

With so many options in the franchise food industry, the Ways chose to work with a franchise consultant who helped them navigate the due-diligence process for several concepts. This helped them to narrow down their search considerably. Once they were introduced to Island Fin Poké and the uniqueness of this brand, the Ways wanted to know more.

The Discovery Day was scheduled and the Ways met with the Island Fin Poké team. Not only did all who met feel a strong connection to one another right away, the Ways also fell in love with the healthy and tasty Poké bowls, the dedication to service and the strong leadership behind the brand. At the end of the day, the Ways agreed to hold off on making any decisions. However, when they woke up the next morning, they each looked at each other and said, “Let’s do this!”

The Ways thoroughly enjoyed the pre-opening process of taking an empty shell and creating their Hawaiian/Caribbean island-themed, fast casual restaurant. Staying within the business model’s open-concept guidelines, the Ways had the freedom to create the warm, beachy look and feel they wanted. They went to work torching dried-out wood, adding beautiful flooring, and a rich, teal-based wall to the space. In time, Jim and Marilyn were the proud owners of the first, northern-state Island Fin Poké in Worcester, Massachusetts, which opened in July 2019.

Once the restaurant was opened, the Ways quickly started connecting and building relationships with their guests, as well as with the entire community. Whether buzzing with local college students, the business community or families with children eagerly searching for the nine hidden fish in the torched wood on the walls, Island Fin Poké is the kind of place where everyone knows one another’s names. It’s this kind of environment, along with the delicious food and high-caliber service, that keep guests coming back for more. The Ways are honored to be able to have this kind of an impact on their community.

Mark Setterington, founder and CEO of Island Fin Poké, had the vision to create a simplified business model for his franchisees to follow, whether operating as a sole owner, a partnership or as a family. In fact, Setterington’s daughter, Taylor, manages an Island Fin Poké on her own and helped in the setup of the Worcester franchise.

In the Way family, roles are shared with Jim handling the books and financing, along with the community relations and marketing aspects of running the business. Marilyn takes orders and prepares the Poké bowls alongside one of their five children, Andy, who also works the service line. With Andy’s scheduled plans to join the Army, the Ways will enjoy working with their son until then.

If you have interest in learning more about an Island Fin Poké franchise, visit islandFinPoke.com.