June 21st: The day with the most light is the day we fight

CINCINNATI — On June 21, FirstLight® Home Care will raise funds and awareness to advance the Alzheimer’s Association’s care, support and research programs for The Longest Day®. The home care company has created a Global Team and invited its franchise locations across the country to join in the fight to end Alzheimer’s.

“FirstLight Home Care is honored to support the Alzheimer’s Association’s efforts to raise awareness and funds in the fight against Alzheimer’s disease,” said Rebecca Rushing BSN, RN, Director of Client Care Services for FirstLight. “Several of our employees have been affected by this devastating disease. We also take care of many clients and families who are living with Alzheimer’s. We recognize the importance of participating in activities such as The Longest Day that help bring the disease out of the shadows.”

The Longest Day is held on June 21 – the summer solstice and the day with the most light. Thousands of participants across the world will come together to fight the darkness of Alzheimer’s through an activity of their choice. FirstLight Home Care offices in the company’s more than 175 markets across the U.S. will participate in a variety of activities and events to shine a light on the 5.7 million Americans living with Alzheimer’s disease and the more than 16 million family members and friends providing care and support.

FirstLight teams will raise funds through events and activities in their local markets, such as bake sales, chili cook-offs, health fairs and more. Some will also hold Ageless Grace fitness classes that are open to the public. Ageless Grace is a fitness and wellness program that seeks to improve health and well-being, reduce stress, keep the brain agile and keep the body responsive. The nominal class registration fee from each event will be donated to The Longest Day.

“We are thrilled to partner with Ageless Grace on The Longest Day,” added Rushing. “Last year, we began offering Ageless Grace training to our franchise owners and managers who, in turn, have trained their caregivers. The customized curriculum was developed by Denise Medved, founder and creator of Ageless Grace, specifically for FirstLight Home Care. The program has been wonderful for our clients who are experiencing cognitive decline.”

Key facts about Alzheimer’s include:

The FirstLight Home Office Headquarters in Cincinnati will be holding several fundraising events as well from June 21 through August all in support of The Longest Day. For more information about Alzheimer’s disease, visit the Alzheimer’s Association at alz.org. 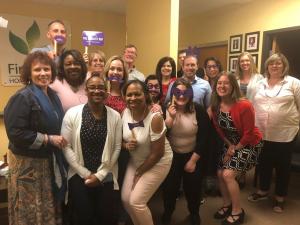 FirstLight Home Care is a leading provider of non-medical home care, helping individuals in more than 30 states achieve the quality of life they deserve. The company has set a new standard in home care by creating an unmatched Culture of Care that drives industry-leading client and employee satisfaction. FirstLight is a lifeline not only for seniors, but for people recovering from illness, injury or surgery, adults with disabilities, veterans, busy families, and anyone 18 and older who needs personal or companion care services. FirstLight Home Care’s mission is to deliver exceptional, compassionate care provided by extraordinary people so that all those who are served may age with comfort, dignity and independence in the place they call home. FirstLight is also proud to champion the family caregivers who give countless hours of care to their loved ones every day by providing the resources and support needed to help them maintain balance in their own lives. Visit FirstLightHomeCare.com. Connect with FirstLight on Facebook and Twitter.