No. 1-ranked Sign, Graphics and Visual Communications Franchisor Continues to Grow Its Successful Co-brand and Conversion Program throughout East Coast

CARROLLTON, Texas — FASTSIGNS International, Inc., franchisor of FASTSIGNS®, the leading sign, graphics and visual communications franchise, announced today that it will be attending and sponsoring the National Business Media Show at the Greater Columbus Convention Center in Columbus, Ohio, Sept. 12-14, 2019.

As part of its aggressive growth throughout the East Coast and nationwide, the brand is recruiting existing business owners interested in adding a FASTSIGNS to their existing business or fully converting their store to a FASTSIGNS franchise. Currently, franchise opportunities exist throughout Ohio in markets like Cleveland, Cincinnati, Newark, Springfield, Mansfield and Muncie, as well as Indianapolis, IN.

“FASTSIGNS’ co-brand and conversion programs are an opportunity for established entrepreneurs to expand their business with the help of an award-winning franchisor. FASTSIGNS franchisees benefit from not only our name recognition and strong reputation, but also from our constant research and new product development, and a business model that has proven to drive sales and reduce supply costs,” said Mark Jameson, Executive Vice President of Franchise Support and Development.

FASTSIGNS’ co-brand and conversion franchise offerings can be started with only $15,000 down on the initial franchise fee.

“I was looking for ways to bring my small business to the next level, and once I came across FASTSIGNS, I quickly learned that the return would be greatly worth the investment for both myself and my business as a whole,” said Josette Brinkman, who recently converted her existing business, Signed By Josette, LLC to a FASTSIGNS center in Findlay, Ohio which is slated to open Oct. 1. “FASTSIGNS has phenomenal brand recognition, and every corporate team member or fellow franchisee I’ve met has been committed to ensuring I have all of the necessary information needed to successfully launch as the newest center for the brand in Ohio. I’m extremely excited to get started and look forward to the opportunity to offer more solutions than just signs for my local community with the help of FASTSIGNS.”

FASTSIGNS is offering a special incentive for first responders, including paramedics, emergency medical technicians, police officers, sheriffs, and firefighters, which includes a 50 percent reduction on the franchise fee — a savings of $24,875.

FASTSIGNS International, Inc. was ranked the #1 franchise opportunity in its category and 95 overall on Entrepreneur magazine’s 2019 Franchise 500®, the world’s first, best and most comprehensive franchise ranking. Acknowledged by entrepreneurs and franchisors as a top competitive tool of measurement, the Franchise 500® recognizes FASTSIGNS, the only sign, graphics, and visual communications franchise to be recognized in the top 100, for its exceptional performance in areas including financial strength and stability, growth rate, and brand power. FASTSIGNS was recently named to the 2019 America’s Best Franchises to Buy list by Forbes magazine. FASTSIGNS also made Franchise Direct‘s list of the Top 100 Franchises 2019 and ranked #2 on this year’s Franchise Gator Top 100 list, both ranking the best franchises for 2019. Franchise Business Review has recognized FASTSIGNS as one of the “Best of the Best” for franchisee satisfaction for the last 10 years, as well as naming FASTSIGNS to its “Innovative Franchises” list in 2017, and its Top 50 Franchises for Women and Top Service Franchise lists in 2019. In 2018, Franchise Business Review named FASTSIGNS a “Best-in-Category” franchise. This year, the Canadian Franchise Association (CFA) awarded FASTSIGNS International, Inc. the Franchisees’ Choice Designation for the seventh consecutive year for its strong relationship with Canadian franchisees, as well as extensive franchisee training and support. 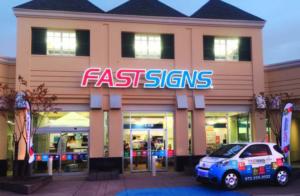