The Sandoval brothers have spent most of their professional lives as entrepreneurs in industries ranging from apparel, home & corporate decoration and real estate investment. The two already own locations in Miami and have a strong passion for the TITLE Boxing Club brand. As natives of Mexico, they saw an opportunity to bring the franchise to their home country and sign the multi-unit deal. Already well on their way to opening 25 clubs, the Sandovals and their team have opened five clubs throughout Mexico City since early 2018.

They anticipate opening five more clubs in 2019 and then five per year until 25 clubs are developed, “Ultimately, we want a TITLE Boxing Club close to everyone in Mexico,” said Jack Sandoval.

“Fitness has always been important to my family, and I was looking for a new workout to try. By the end of my first class at TITLE Boxing Club, I was hooked—not only on the workout, but also on the investment opportunity,” said Alan Sandoval. “After opening clubs in Miami, my brother and I knew we had to bring the brand to Mexico City. The timing was perfect; Mexico has always had a love for boxing, and the fitness market is primed and ready for a brand like TITLE. We are proud to bring 25 clubs to Mexico City and introduce everyone in Mexico to the best hour of their day.”

With the Mexican fitness and health club industry generating more than $1.8 billion in revenue per year, Mexico, and specifically its densely-populated capital, remains a hot growth market for TITLE Boxing Club to continue its international expansion. International momentum has largely been sustained by the brand’s premium service of explosive, total-body boxing and kickboxing classes that energize, strengthen and challenge members.

“This is a milestone agreement for TITLE Boxing Club, being the largest deal our franchise has ever had, and we couldn’t be happier to continue our great relationship with the Sandovals and their team,” said President Susan Boresow. “Mexico is the perfect country for our biggest deal; boxing is ingrained in the country’s culture, and the people have grown up with it. Mexico is renowned for introducing the world to boxing legends, from Julio César Chávez to Canelo Alvarez and more. We strive for TITLE Boxing Club to become a part of that culture and to produce a few champions of our own! This expansion marks a new era for our brand, and we are looking forward to offering our one-of-a-kind fitness experience to members in Mexico City.”

Founded in 2008, TITLE Boxing Club started franchising in 2009 and has since exploded domestically and has continued to embark on its international expansion in 2019. In addition to its development in Mexico, the brand is eyeing international growth in Canada, Colombia and Brazil. 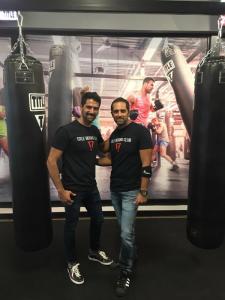