Over 632 people attended, including 150 first-time attendees, which included FASTSIGNS franchisees and their center team members from eight different countries around the world. Attendees had the opportunity to participate in general sessions, educational sessions, peer panels and roundtable discussions. Highlights  from the event included hearing renowned keynote speaker Apolo Anton Ohno – Olympic medalist, “Minute to Win It” host, Dancing with the Stars winner and author of Zero Regrets: Be Greater Than Yesterday speak to attendees. Additional speakers included author, speaker, and President and Founder of Sales Gravy, Inc., Jeb Blount who spoke on Sales EQ and The Real Secrets to Leading High Performance Sales Teams. Attendees also learned phone techniques and tactics from Nancy Friedman, The Telephone Doctor, and profit mastery from Steve LeFever, Chairman and Founder of Profit Mastery.

“2018 was yet another record-breaking year for FASTSIGNS,” said Catherine Monson, CEO of FASTSIGNS International, Inc. “Our annual convention brings our franchise network together to recognize, honor and celebrate the many achievements of our franchisees, as well as to engage in educational and networking opportunities and kick off the year.”

Highlights from the 2019 convention include:

“This event celebrates another successful year for the FASTSIGNS network, and sets the stage for an even more successful 2019,” Monson said. 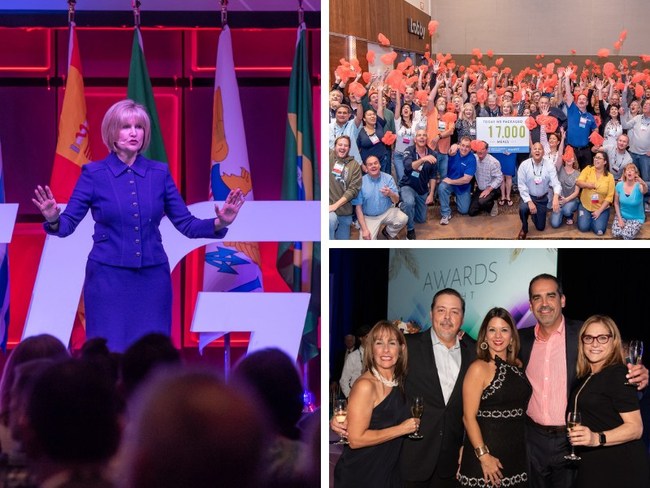 FASTSIGNS International, Inc. is the largest sign and visual communications franchisor in North America, and is the worldwide franchisor of over 700 independently owned and operated FASTSIGNS® centers in nine countries including the U.S., Canada, England, Saudi Arabia, UAE, Grand Cayman, Mexico, Chile and Australia (where centers operate as SIGNWAVE®), and coming soon in Spain and Malta.

FASTSIGNS locations provide comprehensive sign and visual graphic solutions to help companies of all sizes and across all industries attract more attention, communicate their message, sell more products, help visitors find their way and extend their branding across all of their customer touch points including architectural signs and interior décor, event graphics, marketing materials and so much more.  Learn more about sign and visual graphic solutions or find a location at fastsigns.com. Follow the brand on Twitter @FASTSIGNS, Facebook at facebook.com/FASTSIGNS or on LinkedIn.