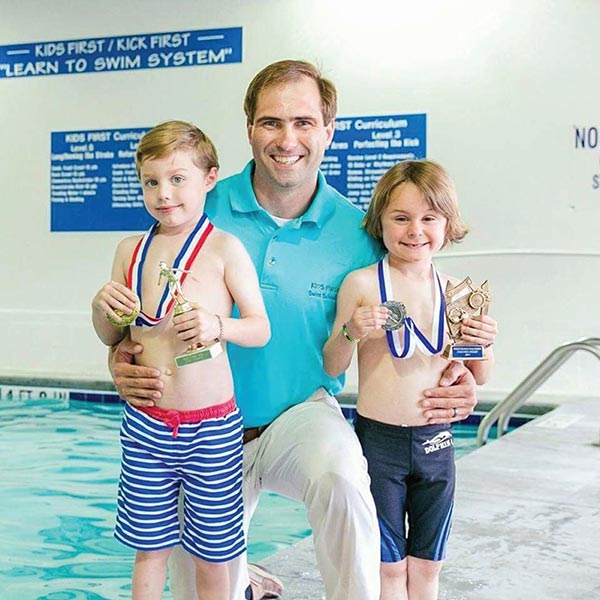 With 39 locations along the East Coast, Kids First Swim Schools teach over 150,000 students each year, with a mission to provide water safety and swimming instruction to children in a kid-friendly environment.

As a public school social studies teacher in Baltimore, Brian Cubbage dedicated his career to educating children. But when he moved to South Carolina, he found that the salaries for teachers were much lower there than what he was earning in Maryland. While he wanted to follow his passion as a professional educator, he had a young family to support.

Upon relocating to Charleston, he had to come up with another career plan. “I thought, ‘What can I do when I get down here?” he said. Cubbage managed to find a perfect compromise that enables him to be the owner of a lucrative business while remaining in the education field he loves. He became the owner of a Kids First Swim Schools franchise.

“It wasn’t about swimming as much as it was about the education aspect for me. When we really dive into it at the heart, it’s a school, it’s about educating the kids and it’s something that’s really important to educate them about,” he said.

With 39 locations along the East Coast, Kids First Swim Schools teach over 150,000 students each year. Its mission is to provide water safety and swimming instruction to children in a kid-friendly environment with tailored classes for young swimmers ages 3 and up. There are also private and semi-private lessons available, providing additional streams of revenue.

Now in his sixth year of owning the business, Cubbage has scaled back on teaching classes as the demands of growing a thriving business have increased. “It’s important to be in at the beginning so you can lead by example,” he said, “I found it easier to be out of the water running it.” Now, he heads an expanding staff of up to 30 instructors during the busy season.

Since safety is paramount to the company, Kids First Swim Schools feature indoor pools that start at only two-feet deep. The program also aims to keep children comfortable in the water by maintaining a pool temperature of 90 degrees. After all, learning to swim as early as possible optimizes a child’s chances of staying safe in the water. “It’s much more challenging to learn to swim as an adult,” Cubbage points out.

When compared to his teaching days, Cubbage admits that his schedule is more demanding now, as he often works 12-hour days. “I work harder doing this,” he said, adding that there are benefits beyond financial rewards for his diligence. “I have more freedom. I like being a leader and having a vision.”

While he does admit he does miss teaching in a traditional classroom at times, Cubbage feels he is getting the best of both worlds with Kids First Swim Schools. “I am still working with parents and kids, which is enjoyable,” he said.

Cubbage’s classroom experience still comes in handy outside of the pool, as he volunteers to give water safety talks to students in local schools. “It’s good marketing for us,” he said, “but it makes a big difference in the community.”