No. 1-ranked Sign, Graphics and Visual Communications Franchisor Will Meet with Qualified Entrepreneurs at the National Business Media Show in Phoenix Feb. 1-2

CARROLLTON, Texas — FASTSIGNS International, Inc., franchisor of FASTSIGNS®, the leading sign, graphics and visual communications franchise, is actively recruiting franchise candidates to grow its co-brand and conversion program throughout the West Coast, including Phoenix, Tucson, Las Vegas, Southern California, and New Mexico. As part of its growth strategy, FASTSIGNS will exhibit at The NBM Show (booth #112) at the Phoenix Convention Center from Feb. 1-2, 2019.

The brand is seeking entrepreneurs with an established business that are interested in diversifying their product lines and services to meet the growing demand for state-of-the-art signage and visual communications solutions. FASTSIGNS has helped countless owners of print shops, photography studios, camera stores, embroidery shops, and more, add a FASTSIGNS to their existing business or fully convert their store to a FASTSIGNS franchise. FASTSIGNS franchisees receive ongoing training and support to stay ahead of the competition and exceed the needs of their local business community. Both the co-brand franchise opportunity and conversion can be started with only $15,000 down on the initial franchise fee.

“FASTSIGNS franchisees that have converted or co-branded their business continue to tell us how the brand recognition, training and support, and the latest technology have driven strong sales and helped them grow their business beyond what they could have done as an independent shop,” said Mark Jameson, EVP of Franchise Support and Development, FASTSIGNS International, Inc. “We’re excited to grow our co-brand and conversion program and look forward to meeting qualified candidates at The NBM Show.”

“After establishing a thriving business within my local community over the past two decades, I was looking for a new way to expand and bring my signage and awnings shop to the next level,” said Nikki Taheri, who converted her existing business to a FASTSIGNS center in Bayonne, New Jersey, with her husband, Brendan Duane. “FASTSIGNS has proven to be an invaluable partner as they’ve provided us with a deeper connection to the signage industry. Beyond the national brand name recognition, FASTSIGNS gives us access to new resources, immeasurable support and vendor relationships which allow our business to provide additional services to our customers.”

FASTSIGNS is known in the industry for equipping its franchisees with tools vital to securing the ongoing success of each individual location. In 2018, FASTSIGNS announced the launch of its partnership with 1HUDDLE, a workforce-training platform that converts unique training content into science-backed, quick-burst training games that are proven to accelerate workforce productivity. Additionally, FASTSIGNS announced the launch of a special incentive for first responders, including paramedics, emergency medical technicians, police officers, sheriffs, and firefighters, which includes a 50-percent reduction on the franchise fee — a savings of $23,750. As part of the International Franchise Association’s (IFA) VetFran program, FASTSIGNS also offers veterans this special incentive. FASTSIGNS is proud to be the only franchisor in its segment to offer a development incentive specifically to first responders and veterans.

FASTSIGNS International, Inc. was ranked the #1 franchise opportunity in its category and 95 overall on Entrepreneur magazine’s 2019 Franchise 500®, the world’s first, best and most comprehensive franchise ranking. Acknowledged by entrepreneurs and franchisors as a top competitive tool of measurement, the Franchise 500® recognizes FASTSIGNS, the only sign, graphics, and visual communications franchise to be recognized in the top 100, for its exceptional performance in areas including financial strength and stability, growth rate, and brand power. FASTSIGNS also has been recognized for its franchisee satisfaction by being named a World Class Franchise by the Franchise Research Institute for five consecutive years and has been ranked by Franchise Business Review as one of the “Best of the Best” for franchisee satisfaction for the last 10 years. Additionally, FASTSIGNS also was named to Franchise Business Review’s “Innovative Franchises” list in 2017 and a “Best-in-Category” franchise by Franchise Business Review in 2018. Last year, the Canadian Franchise Association (CFA) recognized FASTSIGNS International, Inc. with a special six-year Franchisees’ Choice designation for its strong relationship with Canadian franchisees, as well as extensive franchisee training and support. 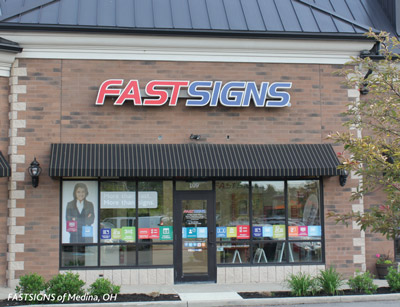 FASTSIGNS International, Inc. is the largest sign and visual communications franchisor in North America, and is the worldwide franchisor of over 700 independently owned and operated FASTSIGNS® centers in nine countries including the U.S., Canada, England, Saudi Arabia, UAE, Grand Cayman, Mexico, Chile, and Australia (where centers operate as SIGNWAVE®).