Cruise Industry Leader Celebrates 2018 Milestones; Looks to Build on Innovation and Growth in 2019

BELLEVUE, Wash. — The top cruise travel agency franchise in North America, Expedia CruiseShipCenters, announced a milestone-heavy year for the growing brand. In 2018, the brick and mortar travel agency awarded its 100th franchise in the U.S., signed its first multi-unit deal, and exhibited 17 percent year-over-year growth. Riding this wave of momentum in 2019, the company expects another high performing year with 35 new franchise locations projected to open.

Adding to the several notable growth achievements over the past year, Expedia CruiseShipCenters awarded 26 new franchises and achieved over $790 million in gross bookings in 2018. The brand also received industry recognition, winning Carnival Cruise Line’s Retail Partner of the Year Award, Holland America Line’s Franchise Agency Network Award, and Norwegian Cruise Line’s Canadian Retail Partner of the Year, among several others. Most notable, Expedia CruiseShipCenters was ranked on Entrepreneur Magazine’s annual Franchise 500 ranking. The prestigious ranking is a testament to the brand’s ability to grow its footprint across North America while continuing to provide unparalleled franchisee support and customer service.

“2018 was a strong year for the brand, as we achieved some new milestones, won a series of supplier awards, and continued to build on the success from last year,” said Matthew Eichhorst, President of Expedia CruiseShipCenters. “We hope to keep this momentum going in 2019, and with our continued focus on agent recruitment and retention, and our plan to incorporate technology and data to drive our consumer outreach, I believe this will be another incredible year for us.”

In 2019, Expedia CruiseShipCenters has eyes set on key markets throughout the U.S. for development including Florida, Texas and California, Georgia, Illinois, and Washington.

With the cruise travel industry expected to continue its rise throughout 2019, Expedia CruiseShipCenters’ growth is in part driven by this continued demand. According to the Cruise Lines International Association (CLIA) report, more than 30M passengers are expected to cruise in 2019 – a 34percent increase from five years prior. Additionally, 24 new ocean, river and specialty ships are scheduled to debut this year, with more than 125 new ships coming online between now and 2027. 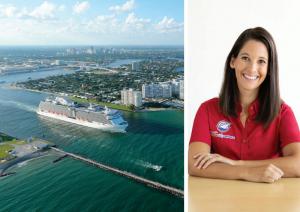 Expedia CruiseShipCenters provides exceptional value and expert advice for travelers booking cruises and vacations through its network of over 270 points of sale. As part of the Expedia Group family of brands, the company’s more than 6,000 Vacation Consultants facilitate the booking of a wide range of vacation products including cruises, flights, hotels, vacation packages, tours, excursions and more. The company has been navigating spectacular vacation experiences for customers across North America for 30 years. For more information on Expedia CruiseShipCenters, visit www.expediafranchise.com.

Expedia and CruiseShipCenters are trademarks or registered trademarks of Expedia, Inc. or its affiliates in the U.S. and/or other countries. Other logos or product and company names mentioned herein may be the property of their respective owners.