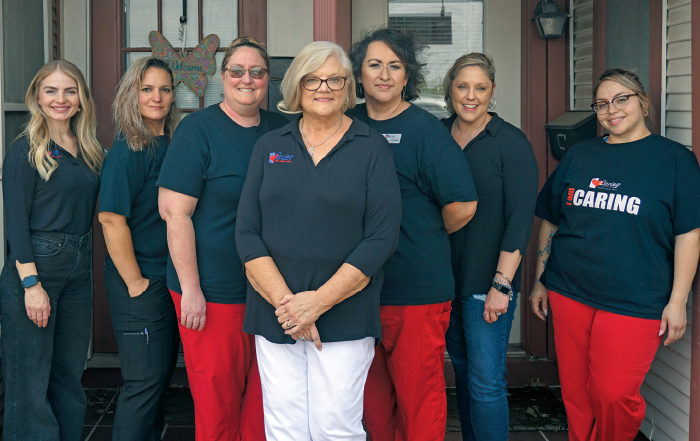 In the 1980s, Cathy Trlica’s grand- mother entered a nursing home for rehabilitation after a hospital stay. Believing that the arrangement was permanent and not wanting to live in a facility, she willed herself to die 10 days later. By Lizzy Yeserski

In the 1980s, Cathy Trlica’s grandmother entered a nursing home for rehabilitation after a hospital stay. Believing that the arrangement was permanent and not wanting to live in a facility, she willed herself to die 10 days later.

“At that point, my grandmother was my most important person in the whole world,” Trlica recalled. “I decided that I would one day do something that would allow individuals to remain home as long as possible.”

The stars aligned years later when Trlica met Jeff Salter, founder and CEO of Caring Senior Service, while serving on an advisory council for seniors. Trlica admired Salter’s company principles and vision so much that she decided to open a franchise in her hometown of New Braunfels, Texas.

“I had worked in corporate America for 35 years and was used to having the counsel of other peers and colleagues,” Trlica said. So when it came to striking out on her own or joining the Caring family, Trlica said she felt it would be beneficial to have the support of a dedicated, deeply experienced corporate team.

Since the company filled the gap in services so well with quality caregivers, care solutions, and active involvement, Trlica found the perfect vehicle to fulfill her passion for helping the senior community. “There’s nothing greater than having someone smile at you after you helped them,” reflected Trlica. “In my mind, that’s just a blessing to make a difference in someone’s life.”

Now, almost two decades after launching, Trlica is about ready to turn the reins over to her daughter and to semi-retire. She’s thrilled that her daughter will continue her mission.

“It takes a village. People need to know that there are agencies like ours out there,” said Trlica, adding, “It’s truly a life-changing experience.”