Thriving as Partners in Both Marriage and Business

Thriving as Partners in Both Marriage and Business 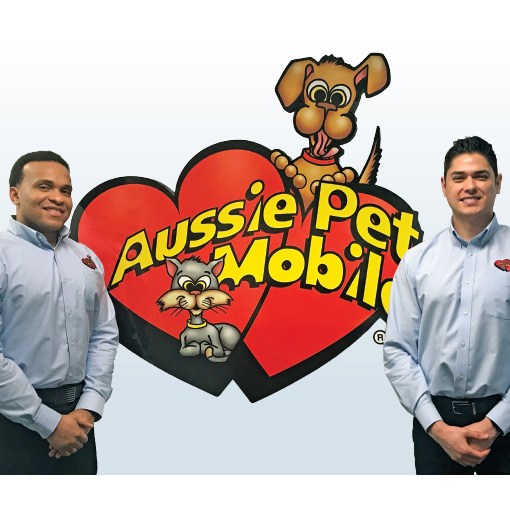 James and Frank Boswell have been successful as partners not only in marriage but also in business. James, an active serviceman in the U.S. Navy, and Frank, a professional interpreter for the deaf, are also franchise owners. The couple owns and operates three pet-grooming units in the Houston area for Aussie Pet Mobile.  By Rochelle Miller

James and Frank Boswell have been successful as partners not only in marriage but also in business. James, an active serviceman in the U.S. Navy, and Frank, a professional interpreter for the deaf, are also franchise owners. The couple owns and operates three pet-grooming units in the Houston area for Aussie Pet Mobile.

Though the two are successful in their individual careers, the proud dads to a French Bulldog and a Chihuahua always wanted their own business – and to do something related to pets.

“We both have a passion in animal care, so we wanted to find a business that revolved around animals,” Frank explained.

Their journey together began 11 years ago in Orange County, California. Frank was a college student attending California State University, Northridge, when he met James, who was stationed in the area.

In the following year, it seemed meant to be when James was being transferred to another base in the Bay Area around the same time as Frank was graduating. “I said, ‘I’m willing to go on this crazy ride as a supporting partner,’” Frank said. The two moved there together and tied the knot in 2013.

More transfers would follow, bringing the couple to Minneapolis and then Houston, where James is currently stationed – and where the two began making more plans for the future to fulfill their dreams of business ownership.

“I love pets. I’m getting near retirement. I always knew I wanted to work with pets once I retired,” James said.  The couple not only settled on a business that involved animals, but they also agreed that franchising would be a more attractive option than starting a business from scratch. In their research of franchise opportunities in the pet industry, James and Frank learned about Aussie Pet Mobile, an international grooming company that started in Australia in 1996.

“It was a good match,” Frank said. With a presence in the U.S. for more than 20 years and more than 300 units, the brand is well-established in America. Even though neither spouse had any experience grooming pets, that wasn’t a deterrent, because more than 90% of Aussie Pet Mobile franchise owners never groom pets themselves, according to the company.

“If you own a restaurant, you don’t have to be a chef necessarily. You just have to find a great chef and have a great menu,” Frank said. “We made sure we have great customer service and deliver on the grooming needs.”

The secret to their success seems to be dividing the responsibilities according to each of their unique strengths. While Frank oversees daily operations, staff scheduling, customer service and point-of-sale activities, James manages marketing, business development, accounting, and vehicle maintenance.

After starting with one unit in 2018, they quickly expanded to three units as demand for their services grew – and they’re not done yet.

“We have a five-year growth plan,” James said. “We’re sticking to it, rolling up our sleeves and working at it every hour, every day of the year.”