BIRMINGHAM, Ala. — Two Maids, the leading residential cleaning franchise, announced today a record-breaking sales month with a network-wide revenue total of over $4.68 million. This mega-month marks another success for the franchise concept as they continue to expand their footprint across the United States including recently opening their 100th franchise location.

In addition to the impressive overall revenue of over $4.68 million, Two Maids saw an average daily revenue of $213K marking a 21% increase from June 2021. Franchisees and the maids themselves are benefiting from the uptick in sales numbers as dozens of franchise locations are exceeding their BHAG (Big Hairy Audacious Goal) – a Two Maids revenue goal set annually by the corporate team – and June saw a positive spike in tips for workers clocking in at 4.02% of corporate revenue.

“Our Two Maids team is powered by an intense work ethic that drives sales success and this year has been a blockbuster for us,” said Paul Ebert, president of Two Maids. “The proof of our hard work is in the numbers as our Two Maids family works hard every day to ensure customer satisfaction and deliver the top results in every space we clean. We look forward to opening additional locations and continuing to serve communities around the country.”

In addition to sales success, Two Maids opened the doors of their 100th franchise location in the United States. A seasoned franchisee with a successful history alongside the Two Maids brand, Anthony Truong opened the newest franchise in Winter Garden, Florida after successful Two Maids ventures in Orlando and Oviedo, Florida.

The record-shattering sales numbers and major franchise milestone bodes well for the cleaning franchise concept in the coming months and the increasing number of franchise openings is nearing a 20% increase from the same time last year. More locations are set to open before the end of 2022 in markets including Denver, Colorado; Mesa, Arizona; and Miami, Florida.

“We are excited to open the doors to our newest franchise location within our Two Maids family and look forward to seeing the team further grow in the Florida region,” added Ebert. “Since our beginning in 2003 we have strived for success in everything we do and that success is powered by our strong family of franchisees.”

To learn more about the brand and franchise development opportunities with Two Maids, visit https://www.twomaidsfranchise.com/. 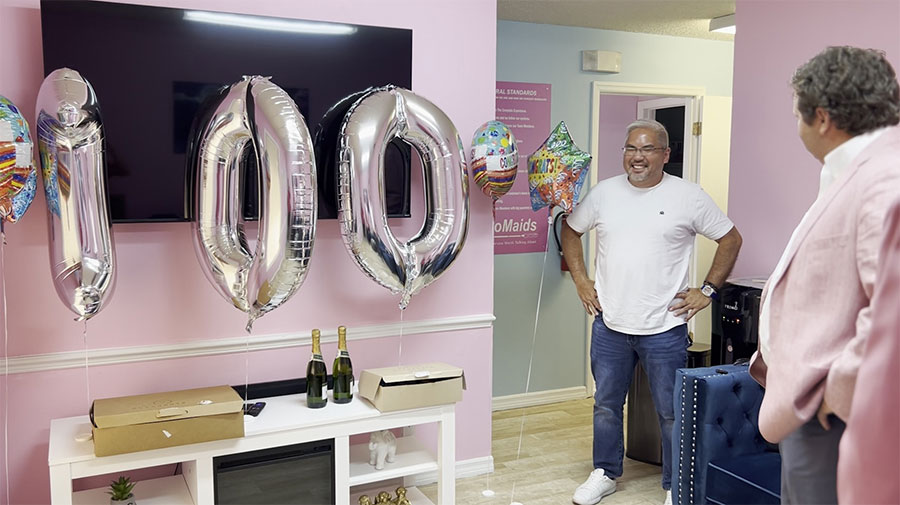 Founded in 2003 in Pensacola, Florida, Two Maids™ currently operates in more than 80 markets across the United States. Designed to provide greater flexibility for customers, the brand offers multiple cleaning packages ranging from one-time cleans to routine services and takes pride in providing safe and reliable professional-grade cleaning supplies and products. Two Maids™ has received numerous accolades including being ranked on the 2021 Entrepreneur Franchise 500 list, for the third consecutive year, and named 2020’s fastest-growing cleaning company in America by Inc. Magazine for the fifth time in the past seven years. For more information, visit www.twomaidsandamop.com.