Stuck in a Rut? N-Compass TV to the Rescue!

Stuck in a Rut? N-Compass TV to the Rescue! 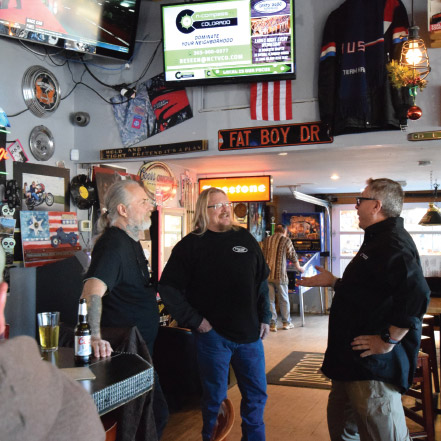 Like many people, John Ruiz was tired of being at the mercy of a changing economy, a corporate structure, and a boss. After holding several different jobs – some with success but no fulfillment, others ending in layoffs – he decided to explore franchise opportunities. By Nancy E. Williams

Like many people, John Ruiz was tired of being at the mercy of a changing economy, a corporate structure, and a boss. After holding several different jobs – some with success but no fulfillment, others ending in layoffs – he decided to explore franchise opportunities.

In 2012, he purchased an N-Compass TV business opportunity, opening iVue Digital in the Minneapolis/Saint Paul area. N-Compass TV utilizes proprietary software to create digital billboard advertising that’s placed in public areas and businesses where consumers are most likely to see it.

“I can tell you it was one of the best decisions of my life,” Ruiz said about signing on with the digital-billboard business. But his journey to business ownership was not easy.

“After being discharged from the Marines, I really wasn’t sure what I wanted to do. I went into the construction industry but ended up getting hurt. Then I was in a motorcycle accident and had to have several surgeries, so my ability to do physical labor came to an end. I saw an ad for an inside sales job and took it. I had no sales experience, but at the end of the training, I was the only one left. I ended up being the top performing sales rep because I did exactly what they trained me to do.”

Ruiz worked his way up from rep to assistant manager, manager, and regional manager with a six-figure salary – but he hated it. “I really didn’t like the people I had to work with. So, the money was no longer important to me and I resigned.”

Ruiz decided to go back to school to enter the field of information technology. Unfortunately, the tech industry was going through a transition as companies began outsourcing work. “After being laid off twice, I decided it was time to go back to inside sales while the tech industry rebounded. I planned for a year but, lo and behold, I look up and three or four years went by and I realized I was stuck right back doing something that I didn’t enjoy.”

Fortunately, Ruiz had been able to save and create a financial cushion, and he decided the time was right to explore franchise opportunities.

A Google search led him to the N-Compass TV business opportunity. “I had no marketing experience, but I was drawn to the technical aspect of what the business was offering,” he said. After a conversation with Don Winfrey, CEO of N-Compass TV, Winfrey offered to cover Ruiz’ expenses to fly to New York and meet with an N-Compass TV dealer. Ruiz signed an agreement before he flew home. “Once I saw the business in action, I was sold,” he said.

Now in his ninth year, Ruiz has been impressed with the evolution of his own business, as well as N-Compass TV. “The model is extraordinary! Although I am technically a one-man team, my clients see me as a full advertising agency because of all the support I receive from the N-Compass TV team.” As a result, Ruiz is contracted with most of his clients for multiple services, in addition to indoor billboards, including social media management, web-site services, and email marketing.

“The other thing I love about N-Compass TV is that most of the corporate team has been there longer than I have. They love their jobs and their boss, which means there is very little turnover,” Ruiz said.