A New Year / A Stronger You!

A New Year / A Stronger You! 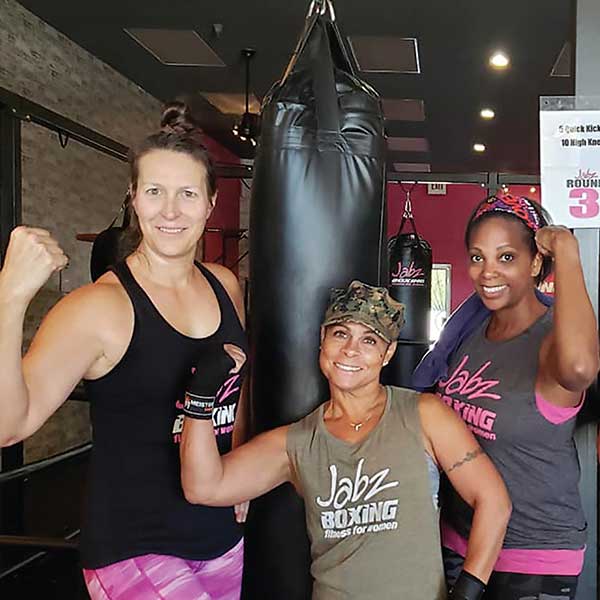 It’s evident that Jabz is not just another boxing studio, and their focus is truly on motivating women in every area while helping build stronger, healthier bodies and minds. By Cindy Charette

When Kimberlee White opened her first Jabz Boxing Studio in 2013, her initial focus was on educating members about functional exercises. As time passed, White began to see faster results for some, but slower results for others. With a passion for complete overall fitness for all members, White decided to investigate what was happening outside the walls of her studio that might be causing different results. What she found was that her members had a variety of eating habits, from overeating to eating unhealthy foods, to not eating much at all.

As White states, “80% of fitness results are based on eating,” so with this discovery and a strong desire to help members in all areas of fitness, she added supplement and protein options for her members to replenish their bodies with after a workout. However, White felt this still wasn’t enough, so she took it one step further.

Jabz Studio members, Jaime Parker and Victoria Barrios of Avidity Wellness were well-known nutritionists in the Phoenix area. When White approached the sisters with her findings, a partnership with Avidity and Jabz began. With the information White had provided, Parker and Barrios created seminars based on the nutritional issues Jabz members were facing.

Parker and Barrios have been with Jabz for three years now, helping studio members on all levels of their fitness journey. With the rapid growth of Jabz into other areas of the country, the sisters use technology to get their inspirational messages to Jabz studios in all locations. White said, “They have a knack for keeping it simple and helping clients based on their specific body type, food requirements, and goals.”

It’s evident that Jabz is not just another boxing studio, and their focus is truly on motivating women in every area while helping build stronger, healthier bodies and minds. The challenge is not only to look good but to feel good as well, by teaching a balance of fitness with accountability outside of the studio, along with relearning healthy nutritional habits and incorporating positive lifestyle changes. Visit www.jabzfranchising.com for more information.