Growing Coffeehouse Franchise Embarks on Southwest Expansion; Plans to Open 180 Locations in Texas in Next 10 Years

HOUSTON — PJ’s Coffee of New Orleans, a New Orleans-based coffeehouse that demonstrates a “southern hospitality” experience, the freshest products, and better beans with superior roasting technique, has announced rapid expansion plans for Texas with hopes to bring 180 new locations within the next 10 years. The region’s plethora of added storefronts will center in the state’s four largest cities with 60 locations slated for Houston, 25 for Austin, 40 for San Antonio and 55 in Dallas-Fort Worth.

“As a New Orleans native and former general manager of a PJ’s coffee in Louisiana, I wanted to bring the coffee houses’ superior product that I loved so much to the people of Pearland,” said Sam. “Since opening, I have seen success I could not have imagined. This journey has allowed me to become the entrepreneur I always hoped to be. With the unmatched support that PJ’s Coffee offers its franchisees, I look forward to continuing to grow with the brand. I can’t wait for their further expansion throughout Texas!”

PJ’s Coffee serves a wide variety of iced, frozen, hot, cold brew, and nitro-infused coffees using only the top one percent of Arabica beans, as well as organic tea and fresh breakfast pastries. PJ’s famous iced coffees are brewed daily using a special cold-drip process that protects the flavor and strength of the beans, while producing a coffee that is two thirds less acidic – a process pioneered by PJ’s Coffee founder, Phyllis Jordan, decades ago.

“At PJ’s coffee we are committed to serving up a top-tier product rooted in southern hospitality. As we sought further expansion, Texas became an obvious choice as an area with similar values and upbeat vibe,” said David Mesa, Chief Development Officer of PJ’s Coffee. “We look forward to rapidly expanding and consistently adding to the PJ’s coffee family in our neighboring state because you know what they say- everything’s bigger and better in Texas.”

To become a part of the ever-growing $100 Billion a year global industry, prospective franchisees can expect a total investment range between $185,000 – $360,000 for non-traditional franchise units, and $350,000 – $566,000 for traditional units. The operating model and menu is adaptable to any environment with different options from kiosks to free-standing locations with a drive-thru, ranging from a few hundred square feet up to 2,200 square feet. 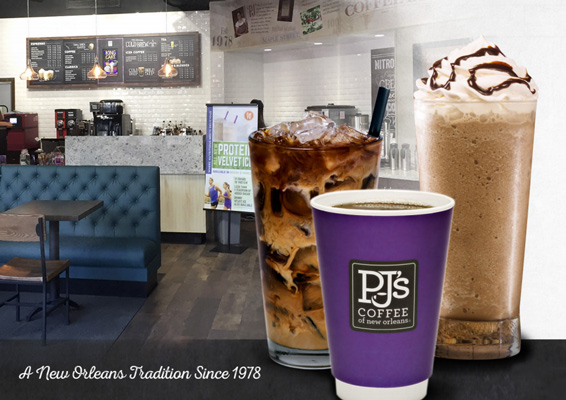 PJ’s Coffee of New Orleans was founded in 1978 by Phyllis Jordan, a pioneer in the coffee industry. The coffeehouse was acquired by Ballard Brands in 2008 which was spearheaded by brothers Paul, Scott and Steve Ballard. The New Orleans-based coffeehouse demonstrates that better beans, superior roasting techniques, and pure passion for the art of coffee-making matter. The brand serves a wide variety of hot, iced and frozen coffee beverages using only the top one percent of Arabica beans, as well as organic tea and fresh breakfast pastries. As the company approaches its 40th year as an established brand, it continues to remain an authentic coffeehouse with a New Orleans spirit. PJ’s Coffee has more than 90 locations open and operating nationally and internationally.