Mosquito Sheriff: A Thriving Opportunity With a Socially Responsible Spin

Mosquito Sheriff: A Thriving Opportunity With a Socially Responsible Spin 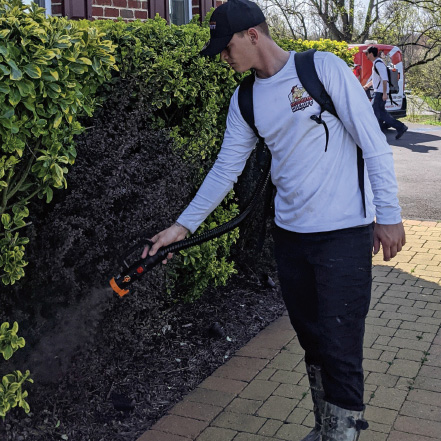 When Patrice Rice first started Mosquito Sheriff back in 2019, her goal was to create a powerful, effective pest-control solution that would eliminate common outdoor pests – specifically, mosquitoes, fleas, ticks, and stink bugs – without the use of harmful chemicals. The approach? Rice worked directly with experienced chemists to create a 100% nontoxic formula that eliminates the need for harsh, dangerous chemicals by creating an all-natural barrier spray. This spray is the first of its kind, paving the way for a greener approach to pest control that takes into account the health and safety of gardens, pets, bees, butterflies, and humans.

A little less than two years into running Mosquito Sheriff, Rice began to actively franchise, expanding the business’ reach and creating an opportunity for those who, like her, were passionate about building an eco-friendly business.

When it comes to highlighting the benefits of running a Mosquito Sheriff franchise, there’s no shortage of attractive considerations. For starters, Mosquito Sheriff has created an entirely hassle-free operation model for franchisees, such as automating each owner’s daily route and offering comprehensive support as part of the startup costs, including digital-marketing materials and a branded van.

Another major benefit is the impressive flexibility that franchisees get when operating their own Mosquito Sheriff business. In addition to being home-based, the business only operates from March through October. This gives franchisees the opportunity to take several months off, including during the holiday season, to relax, spend time with family, and plan for the following season.

Mosquito Sheriff also offers two different models for prospective franchisees to choose from when starting out. On the one hand, the owner can take a hands-on approach by going out on customer-service rounds themselves. On the other hand, they can hire drivers to tackle the jobs while they manage everything from home. The approach a franchisee takes when it comes to how they operate and scale their business is entirely up to them, and the Mosquito Sheriff team is always ready to support along the way, no matter the approach.

Last but not least, there is the benefit of Mosquito Sheriff’s social responsibility. Operating a Mosquito Sheriff franchise not only means doing right by the environment, but it also means doing right by disenfranchised communities around the world. For example, Mosquito Sheriff partners with Honduras Compassion Partners to improve the living conditions of rural populations in Honduran villages by building wells, helping install water filters, and providing mosquito netting to minimize the spread of disease.

Mosquito Sheriff even brings a level of this social consciousness directly to the franchising process, with special discounts for minority owners as well as first responders and those who served time in the military.

At the end of the day, owning and operating a Mosquito Sheriff franchise is about a lot more than just reducing the risk of ticks after a game of fetch on the lawn or deterring mosquitos from ruining a summer barbecue. It’s also about making an environmental and social impact that goes far beyond the backyard.