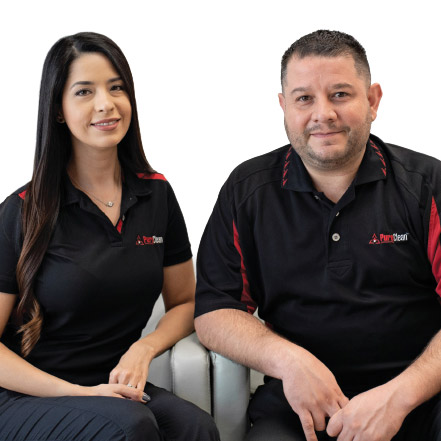 After years of being pursued by a U.S. company, due to Ivan Oliver’s impressive background in industrial engineering, the day finally came when Ivan and his wife Karina made the difficult decision to leave Mexico and relocate to the U.S. By Cindy Charette

After years of being pursued by a U.S. company, due to Ivan Oliver’s impressive background in industrial engineering, the day finally came when Ivan and his wife Karina made the difficult decision to leave Mexico and relocate to the U.S.

Once settled in their new home in the states, Ivan and Karina traveled to Mexico to visit family. When they returned from their trip, they came back to a water-damaged home, from the ceilings down to the floors. Feeling overwhelmed and alone in a new country, and with a baby on the way, they struggled while working through the cleanup process with a local restoration brand. The experience was filled with confusion and difficulties, making it one they would like to forget. It was this interaction that would eventually grow Ivan’s desire to create a business culture around customer service.

As Ivan continued to be promoted and generate success in his corporate positions, he realized he was prioritizing his job over spending time with his growing family. Knowing he needed to pursue work in a different direction, and with gratitude for every opportunity he had been given, Ivan courageously fired his boss and left corporate America. With new dreams to achieve, Ivan and Karina began searching for the right franchise to own and operate together.

After looking into several options, the couple was introduced to the PuroClean franchise opportunity. Despite having little knowledge about the restoration industry – other than what they learned from their painful experience when their own home flooded – the couple felt an immediate connection to PuroClean’s mission of serving others during their times of need. In 2019, The Olivers were acknowledged by PuroClean as the “Rookie of the Year” for having the highest sales growth their first 12 months in business out of all eligible new franchise owners. Subsequently, they have also been recognized in the President’s Circle for being one of the franchise system’s owners in the top 10% who achieve excellence in sales, growth, brand compliance, participation in brand initiatives, among other core values.

Due to the essential nature of their work in homes and businesses, the COVID-19 pandemic has not caused a work slowdown for this industry. As Ivan explained, “water lines still bust, and electrical elements still fail and cause fires,” despite any recession or pandemic. What’s most important, according to Ivan, is to be sure that you are the first business they think of calling when the need arises.

The Olivers have found success by following PuroClean’s proven franchise system and ensuring that their number one priority is to provide excellent communication and customer service.

For more information about a PuroClean franchise, visit purocleanfranchise.com.