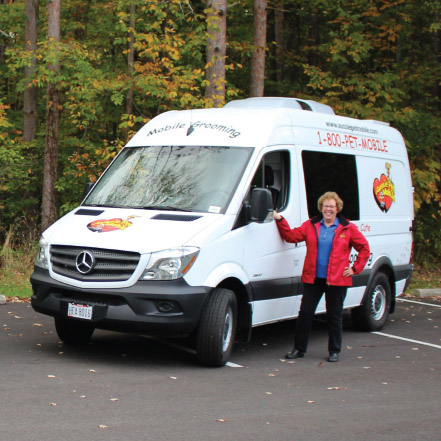 As vice president of operations for a chemical nanotech company, Darlene Jacobson had already broken the glass ceiling in many ways. She knew, however, she was destined for even higher aspirations – like owning her own business. By Rochelle Miller

As vice president of operations for a chemical nanotech company, Darlene Jacobson had already broken the glass ceiling in many ways. She knew, however, she was destined for even higher aspirations – like owning her own business.

“Knowing how to run someone else’s organization made me yearn to do it for myself,” she said. Though she began exploring her options years before leaving corporate life, Jacobson found it hard to walk away from the salary and perks of her position.

It wasn’t until her company began out-sourcing that Jacobson found herself out of a job. Instead of looking at it as a tough break, Jacobson saw it as the push she needed to finally take that step she had been dreaming of: to try entrepreneurship.

“When I had an opportunity to reinvent myself, I thought, if not now, then never,” she said. With the help of a franchise consultant, Jacobson found a perfect business fit with Aussie Pet Mobile, a leading provider of mobile pet-grooming services with more than 300 units in the U.S. alone.

“I’ve always been a big pet lover,” said the owner of two rescue dogs and one cat. “Aussie Pet Mobile rose to the top.” While she loves animals, Jacobson admits she had no experience in the pet-grooming field. Then again, it isn’t a requirement for franchise owners. Most Aussie Pet Mobile franchise owners never actually perform grooming duties but instead manage the business.

“I hire professionals. I thought it was important that our clients get the best possible service,” she said. Her dedication to quality customer service and operational experience has been a winning combination, as Jacobson has grown her business from one unit when she signed on in 2017 to owning five units today. “It is a recurring business. Doggies get dirty,” she quipped.

Still, she feels that there is room for growth. “I don’t feel I’m anywhere near exhausting my territory,” said Jacobson, whose business covers the eastern suburbs of Cleveland, Ohio. Jacobson has been expanding her customer base by an average of 15 new customers each week, and said she hopes to double her fleet.

Jacobson attributes her success to the support provided to franchise owners by Aussie Pet Mobile. “I would not be at this level if I were completely independent,” she said.