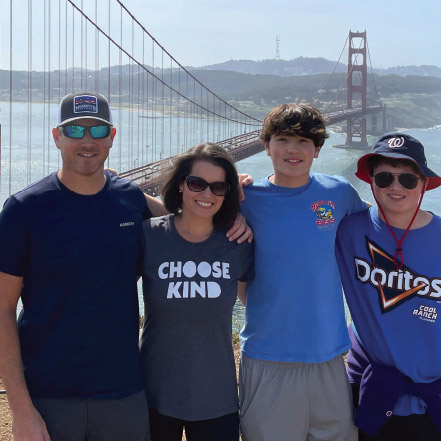 With Father’s Day around the corner on June 19, FranServe, Inc. interviewed three of its many successful franchise consultants who are also fathers. They shared how their franchise consulting businesses have allowed more time with their families and other ventures. By  Cindy Charette

With Father’s Day around the corner on June 19, FranServe, Inc. interviewed three of its many successful franchise consultants who are also fathers. They shared how their franchise consulting businesses have allowed more time with their families and other ventures.

Mike Halpern became hooked on the franchise industry 21 years ago, when he began working in franchise development. When his first son was born

in 2006, Halpern went out on his own and formed the company Franchise Freeway. For 15 years, Halpern converted independent businesses into franchise systems and then became a full-time consultant with FranServe, Inc. in 2020.

“I’ve been self-employed for 17 years. For the first 15 years, I was truly on my own, and for the last two, I have been affiliated with FranServe. In self-employment, there has been a noticeable and positive difference with FranServe in my ability to craft my schedule to put time with my family first and schedule around that time with my clients accordingly.

“I have been able to coach my sons’ Little League teams for 14 spring and fall seasons, enjoy travel with my family, and enjoy an ideal work-life balance,” Halpern said.

Having a health-and-fitness background, Joel Hayek’s start in franchising began with several investments in personal-training and massage-therapy franchises. Hayek had taken on an area developer role as well as a consulting role with one of those brands, and he developed it to 200 locations, before selling it back to the franchisor. When ready to move on to new ventures, Hayek, a self-described serial entrepreneur, opened a gym and established his franchise consulting business, Collaborative Franchise Consulting, in 2021.

“I love having control of my success.” Hayek added: “Franchise consulting fits great because I like to work and like to work hard, but I like to be able to control that.”

He advised that, although not always easy, setting your priorities and your schedule is the key to success and finding the right balance. Hayek and his wife, Kristal, have four children, and he enjoys coaching and watching their sports.

After working for a franchise, Jason Blough was looking for a brand of his own when he learned about franchise consulting. With the help of a FranServe consultant, Blough joined FranServe, and Franchise Search Partners, LLC was founded four years ago, just about the time his daughter was born. Blough stated, “From that standpoint, it was perfect timing because becoming a franchise consultant enabled me to really be at home ever since my daughter was born. I couldn’t imagine my former life of waking up early, commuting, working all day… and barely seeing my child. That’s a foreign idea to me, but that’s the reality for some people.”

Blough’s franchise consulting business has grown exponentially. He was the first to reach FranServe’s Million Dollar Club in 2021, and he has most recently earned recognition as FranServe’s first $500K Club inductee of 2022. Additionally, Blough owns two different franchise brands that are relatively passive from an operations standpoint. Blough said he is extremely grateful for the freedom he has to spend with his wife, Michele, and daughter, and he appreciates the ability to spend time with his family when he chooses, instead of when an employer decides.

Blough said: “I think franchise consulting is a great idea for the flexibility and freedom. As long as you stay the course, you should have a pretty good business built for yourself before too long.”