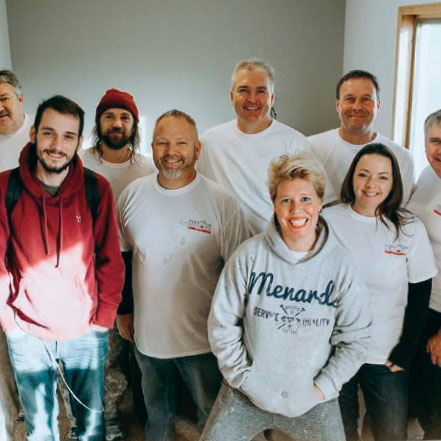 After returning from a tour of duty with the U.S. Air Force in 1994, Erech Gallatin launched a successful real estate career, buying and selling homes in Minneapolis, Minnesota. His listings moved quickly and after a decade of experience, his business was booming. By Jessica Jones

After returning from a tour of duty with the U.S. Air Force in 1994, Erech Gallatin launched a successful real estate career, buying and selling homes in Minneapolis, Minnesota. His listings moved quickly and after a decade of experience, his business was booming.

But when he needed to spruce up his properties to improve curb appeal, Gallatin had a hard time finding the right professionals to complete the work. So he took matters into his own hands and, in 2015, he purchased a 360˚ Painting franchise.

“I chose the franchise route because I knew it would give me more control over my projects,” Gallatin said. “I immediately found a demand for my painting services. Soon I had to forgo buying and selling houses and concentrate solely on being a 360˚ Painting owner.”

As a part of Premium Service Brands, 360˚ Painting specializes in interior and exterior painting of residential and commercial properties. The company, founded by Paul Flick in 2006, has built a strong reputation in the home services category by delivering a careful, professional painting process coupled with a customer-first approach. For Gallatin, the brand completely reinvented his career.

“It’s a low-risk business with good cash flow,” Gallatin said. “You’re not dealing with expensive equipment and the turnaround time is relatively quick.”

And even when a global pandemic created uncertainty in the economy, Gallatin’s business continued to thrive. “The market is changing at a pace we’ve never seen before, but thankfully there is steady growth in the home improvement sector,” he said. “Families were quarantined to their homes this spring, looking at things they’d like to change, so while other businesses have witnessed a slowdown, our 360˚ Painting franchise has continued to grow.”

In the future, Gallatin hopes to expand his presence within Premium Service Brands, diversifying his business holdings to include several more franchises.

“I’m proud to be a part of this company because they respect the military community and treat owners like family,” Gallatin said, citing a 10% franchise fee offered to veterans. “I am currently focusing on 360˚ Painting, which has brought me much success over the past five years. But expansion is certainly in our future.”