RICHMOND, Va. — Conserva Irrigation, the only national outdoor irrigation company founded on the concept of water conservation, announced today the addition of six new territories. While the pandemic has caused uncertainty across the country, Conserva Irrigation has continued to grow, signing three new franchisees to the system and expanding across Greater Denver, Colorado, Rochester and Mankato, Minnesota, and Greenville, South Carolina.

Conserva Irrigation’s expansion comes on the heels of a very successful first half of the year. Earlier this year, the smart irrigation leader added 14 new territories and seven new franchisees, while debuting in Utah, California, South Carolina and Indiana. With the addition of 20 territories year-to-date across seven states, Conserva Irrigation has now grown its footprint across nearly 100 territories in markets throughout the country.

“The coronavirus pandemic has had a lasting impact on small businesses in our country and we consider ourselves very fortunate to have sustained success during the economic downturn because of our strong company culture and recession-resistant franchise model. It’s because of our dedicated staff and talented franchisees that we’ve continued to grow amid turbulent times,” said Russ Jundt, founder of Conserva Irrigation. “We’re looking forward to continuing to support our existing franchise partners, adding new small business owners to our family and providing employment to those searching for an opportunity in irrigation.”

As a result of Conserva Irrigation’s sustained growth, the company recently jumped more than 1,400 spots in this year’s Inc. 5000 ranking, which lists companies based on their percentage of revenue growth from 2016 to 2019. In addition, Conserva Irrigation has experienced its highest sales months in June and July since the brand’s inception. With a successful track record and growing number of franchisees, Conserva Irrigation has remained nimble to sustain company growth and even launched a virtual franchisee training this year that includes in-depth videos showing franchisees how to use the irrigation equipment while maintaining social distancing requirements.

Conserva Irrigation is looking to expand further throughout the United States and is seeking single- and multi-unit operators with a range of corporate experience, as well as those looking for add-on or conversion business opportunities. Potential franchisee candidates should be willing to initially invest between $81,800 and $102,250. Incentives are also available for veterans, multi-territory agreements and those with existing businesses. 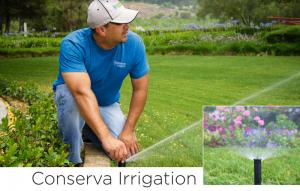 Founded as a franchise in 2017, Conserva Irrigation is the only national outdoor irrigation company founded on the principle of water conservation. The brand is part of Outdoor Living Brands, a market-leading franchisor of premium residential and commercial outdoor living services. With 90+ territories operating across the country and growing, Conserva Irrigation is helping home and business owners reduce water consumption through its use of a proprietary irrigation auditing system and water-efficient irrigation products. Conserva Irrigation recently debuted on Entrepreneur Magazine’s 2020 Franchise 500 list at #296, followed by recognition in Entrepreneur’s 2020 Top New Franchises list at #7. Additionally, the brand was recognized among Financial Times’ 2020 America’s Fastest Growing Companies list and the Inc. 5000 2020 ranking. For more information about Conserva Irrigation, visit https://www.conservairrigation.com/ or OutdoorLivingBrands.com.