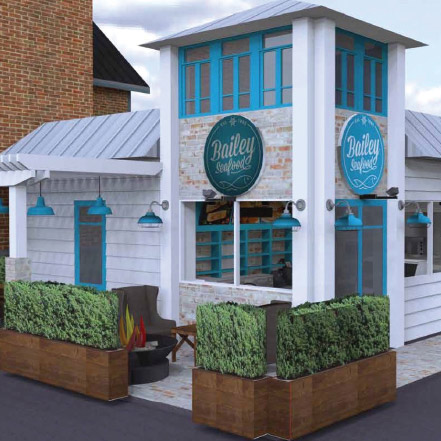 Warning: Scrolling through Bailey Seafood’s social media pages will instantly make you hungry. Probably because @baileyseafoodfresh posts plenty of photos showing off succulent shrimp platters, steamed crab legs, and perfectly browned hushpuppies. In true #foodporn form, these photos get the hunger juices flowing. And as summer approaches, the Buffalo, New York-based franchise is using its Instagram and Facebook accounts to tease some dynamic seasonal offerings. Take a peek if you dare, but make sure there’s lobster within reach.

“We change our menu every season to keep things fresh,” said Michael Kontras, owner of the rapidly expanding brand. “We’re incorporating tacos on the menu this summer – I think it’s a really exciting addition.”

A specialist in grab-and-go, Bailey Seafood offers a range of homemade soups, seafood boils and skillets, and has become known for its generous portions. Founded in 1985 by Kontras’ father, Bailey Seafood originally operated as a fish market, providing fresh cuts of fish for local residents. When Michael joined the business in the early 1990s, he expanded the offerings and gradually introduced a menu of takeout dishes.

“I wanted to get out of the raw fish market because it’s a lot of work and a lot of long hours,” Kontras said. “I also recognized that my generation doesn’t like to cook their own fish like past generations did. Takeout is a big business with younger customers. So we shifted to takeout and the business grew.”

Quickly anchoring itself as the area’s go-to spot for a fast and fresh dinner, Bailey Seafood found favor with its one-of-a-kind “belly busters” and “super sandwiches.” A 2018 remodel and menu extension at its Buffalo flagship expanded upon the Bailey Seafood brand, adding 23 extra feet of open kitchen space to accommodate orders of hand-breaded fish, fresh salads and house-made sweet-potato pies.

Since franchising in 2019, Bailey has opened a few delivery-only ghost kitchens and several small traveling pop-up eateries throughout the country, including a recent signing in Brooklyn, New York. Brick-and-mortar stores have opened in Pennsylvania, Atlanta and Los Angeles. Each store features Bailey’s signature open-kitchen design, which offers customers a glimpse at their seafood being fried, baked, steamed, or sautéed.

“All franchises will be offering our core menu as well as our new seasonal offerings,” Kontras said.