FT. LAUDERDALE, Fla. — Anago Cleaning Systems (Anago), an industry-leading commercial cleaning franchise with over 40 Master Franchise locations and more than 1,500 Unit Franchises throughout the U.S. and internationally, announced its newest Master Franchise has opened in Austin, TX. The Master Franchise is owned by Aaron Grohs, a sales and marketing veteran with significant franchise experience.

“Aaron knows what it’s like to lead a franchise and his decades in sales and marketing will make the Austin Master Franchise immediately successful,” said Adam Povlitz, President & CEO of Anago Cleaning Systems. “We’re excited to service the Austin market and to provide so many people opportunities to own and operate unit franchises there.”

Grohs has spent the majority of his professional career in commercial printing, including over 15 years with Consolidated Graphics in Houston. Grohs was a sales and marketing executive where he helped grow the public business into one of the leading commercial printing companies.  After the company was sold in 2013, Grohs served three years as President of AlphaGraphics, a print and marketing franchise with over 250 locations worldwide.

“Having led a franchise, I recognize how precisely the entire Anago team executes to make this international franchise one of the very best, which will allow me to focus on growing a winning business in Austin,” said Grohs. “I look forward to working closely with the Austin business community and help many small business owners live their American dream through ownership of unit franchises.”

When he isn’t busy growing his newest franchise, Grohs lives in Austin with his wife and four sons. 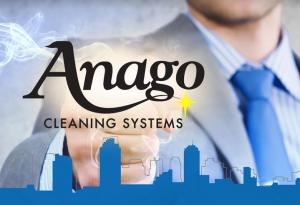 Anago Cleaning Systems is a commercial cleaning franchise system supporting over 40 Master Franchises and over 1,500 Unit Franchisees in the U.S. and internationally. After years of refining procedures and creating duplicable systems created in his large commercial cleaning service, David Povlitz founded Anago in 1989 to help other entrepreneurs open their cleaning businesses. Today, its program sets the standard worldwide in commercial cleaning. Anago was ranked in the Top 100 and #2 best commercial cleaning franchise by Entrepreneur Magazine for their 2018 Franchise 500® ranking. Additionally, Anago was ranked the #1 Janitorial Franchise by FranchiseRankings.com in 2018 and ranked by Franchise Business Review as one of the best franchises in Franchisee satisfaction for 11 consecutive years. Inc. Magazine has also listed Anago as one of the top privately-held companies in the U.S. For further information, visit its website at http://www.AnagoMasters.com.