DENVER — AlphaGraphics, a global leader in printing and marketing solutions, has been named to the Franchise Times Top 200+ for 2019. For more than a decade, AlphaGraphics has been recognized on the prestigious list of the top franchises in the United States.

“In 2019, we’ve awarded more new franchise locations than the last five years combined,” said Bill McPherson, vice president of franchise development at AlphaGraphics. “From franchise owners to senior leadership, the AlphaGraphics team has been dedicated to building a successful brand, and that unity is what helps us achieve honors like this.”

The Franchise Times Top 200+ is an annual ranking system for franchise companies. Franchise Times chooses the top 500 brands based on sales and overall growth from the previous year. To qualify, a company must be a legal U.S. franchise, and franchisees must own at least 15% of the company’s total units.

“As a brand, we have more than 255 locations in the United States, as well as 30 internationally,” said McPherson. “Many of our owners own multiple territories, which is a testament to the AlphaGraphics brand and the operational support the owners receive. For 49 years, AlphaGraphics has been a trusted local brand. As the demand for our services has grown, we’ve expanded our offerings to include digital marketing and other solutions that keep the company relevant and a franchise favorite among entrepreneurs.”

Founded in 1970 by Rodger Ford, AlphaGraphics began franchising in 1979, and 100% of the company’s territories are franchisee-owned. AlphaGraphics services include printing, marketing, signs and much more. AlphaGraphics has established itself as a respected industry leader in printing services and is a top franchise company. 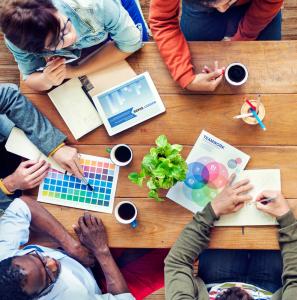