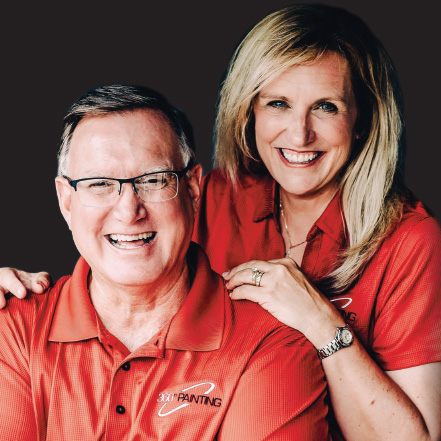 Before launching their 360˚ Painting franchise last summer, Mack and Sharon Strange were unsure if their post-retirement collaboration was a good idea. Mack, a former minister, and Sharon, a former teacher, had differing managerial styles. But after almost one full year in business, their Nashville-based company is booming. By Jessica Jones

Before launching their 360˚ Painting franchise last summer, Mack and Sharon Strange were unsure if their post-retirement collaboration was a good idea. Mack, a former minister, and Sharon, a former teacher, had differing managerial styles. But after almost one full year in business, their Nashville-based company is booming.

“I was a preacher for 30 years so I can be pretty loud, and Sharon fires me at least once a week because of it,” Mack laughs as he describes his speakerphone sales calls that often dominate the home office space he shares with his wife. “I’m ‘Type A,’ really high energy, used to being in charge. Our family life was built around what I was doing for decades, and that’s kind of flipped now. Sharon is the face of our company, and she is hungry and not satisfied with average. I love it. I am so proud of her. We produce differently, but our different business skills have certainly equaled success.”

Married for 31 years, the couple ventured into franchising in 2019.

“Our children are grown, and we had both recently retired, so we decided to build a business because it was something that we could do together,” Mack says. “We worked with a franchise consultant and considered car repair, massage and Pilates brands before ultimately signing on with 360˚ Painting.”

Although neither had home improvement experience, 360˚ Painting, owned by Premium Service Brands, which owns five different home-service companies, was the perfect fit.

“It wasn’t the business of painting that attracted us. It was the economic feasibility of this company that drew us in,” Mack says. “They offered a great opportunity and a solid business plan.”

The Stranges were impressed with the company’s focus on people and leadership skills, rather than painting experience. And there was immediate availability for territory just 20 minutes north of their home. Soon after they purchased, a territory even closer to home became available, so they purchased that one, too. “It’s been a wonderful expansion, which has allowed us to develop quite rapidly,” he says.

Their inaugural year has not been without its challenges. A series of deadly tornadoes blew through Nashville in March and the coronavirus has also adversely affected the home-improvement industry, but the Stranges’ 360˚ Painting franchise has endured.

“These tragedies have created a surreal environment for us, but thankfully we’ve been labeled essential workers,” Mack says. “We follow the Centers for Disease Control and Prevention protocol, wear gloves and masks on all of our jobs, and practice social distancing. This is our first spring as business owners, which is high time for painters, and despite these challenges we have still remained profitable. Our sales goal going into 2020 was $1 million, but we have adjusted it now to $750,000, and with all that has happened in these last few months, we will be pleased with those numbers.”

Attributing their success to the 360˚ Painting brand’s strong franchisee set-up and assistance, Sharon says the company’s forward-thinking approach to technology and customer service has been second to none. “The technology and support at 360˚ Painting was something that we didn’t find with other companies we were vetting,” she says. “And Paul Flick (president of Premium Service Brands) is truly invested in all of his franchisees’ success. He offers each of us the best resources possible and supports owners with weekly coaching calls and peer groups that have been incredibly supportive throughout this entire process.”

The Stranges also respect 360˚ Painting’s community commitment. “We are so proud of Kids-Lift,” Sharon says, referring to Premium Service Brands’ charitable program supporting children, families and schools in need. “It’s wonderful to work for a brand that places so much emphasis on giving back to others. That’s where our heart is, and we look forward to being more involved with this great outreach.”