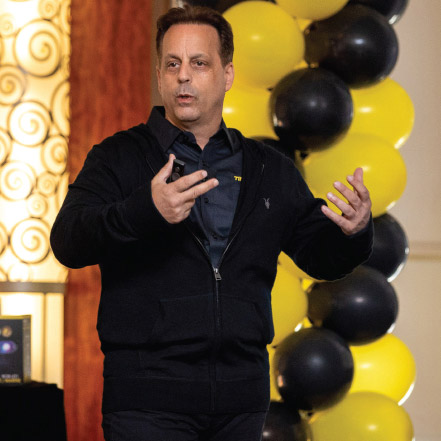 When Charles Bonfiglio was just 12 years old, he learned how to run a business. Visiting his father’s clothing factory every day after school, the Brooklyn native swept floors, tidied up the sewing machines, and learned how to cut and print clothing patterns for famous designers, such as Norma Kamali, Geoffrey Beene and Calvin Klein. By Jessica

When Charles Bonfiglio was just 12 years old, he learned how to run a business. Visiting his father’s clothing factory every day after school, the Brooklyn native swept floors, tidied up the sewing machines, and learned how to cut and print clothing patterns for famous designers, such as Norma Kamali, Geoffrey Beene and Calvin Klein. The skills he learned early on extended far beyond general duties. In his father’s factory, Bonfiglio discovered how to be a leader from the bottom up.

“The most important lesson my father ever taught me was how to treat people,” Bonfiglio said. “There was a great culture that existed in his factory – every person who worked for him was a well-respected member of our family – and that type of transparent leadership really hit home for me. When I became a business owner myself, I made it my goal to build those same types of workplace relationships.”

Venturing out on his own at the age of 21, Bonfiglio left the clothing business to pursue his interests in the car-stereo and aftermarket automotive industry. Armed with his $30,000 life savings and a suitcase, he purchased a one-way ticket to Florida and started working in a friend’s car shop, learning the ropes and building his credit. After being denied a business loan by several banks that deemed his model too risky, Bonfiglio stumbled upon a safer opportunity with a Meineke franchise.

“I never thought I would become involved in a franchise, but I liked the idea that you were given a road map and a blueprint on how to build a business,” Bonfiglio said. “I opened my first Meineke store in 1983 and, soon after, opened a second. I eventually wound up with 10.”

Growing to become one of Meineke’s top franchisees, Bonfiglio says he was part of the company’s first point-of-sale software launch in the early 1990s and played a role in establishing electronic ordering for the brand. While the company taught him a lot, he was left still searching for more.

“Yes, I was involved in the automotive industry, but aftermarket accessories was what I set out to do,” Bonfiglio said. “So, in 2005, I started looking into this brand called Tint World that had been in existence since 1982. I made them an offer, bought the rights to their business model, and in 2006-2007 launched franchising efforts.”

Bonfiglio immediately brought the six-store business to nine stores and started infusing all he had learned with his former franchise into this new system.

“Tint World was a nice franchise, but it was built on a shoestring,” Bonfiglio said. “There was no point of sale or computer systems – just some small offices with a counter and a couple of packages and signs. I knew if I could expand services and use all of the knowledge I had from working with a bigger franchise, I could take Tint World to another level.”

With locations in 35 states, plus stores in Canada, Saudi Arabia, and the United Arab Emirates, the brand has over 100 stores in operation and 80 in development. Bonfiglio proudly states that he is on pace to hit a target of 300 stores by 2025.

Bonfiglio says he still refers to his father’s leadership skills, treating all of his franchisees like family, helping each one focus on their own success, while fostering a positive corporate culture. In the future, he hopes to pass the Tint World empire on to his son. “He’s in college now finding his way,” Bonfiglio said. “I’d love for him to join me one day, but he needs the freedom to build something of his own too. For now, I’m focused on growth; we recently bought property for a new corporate headquarters and are looking for motivated people to join our team.”

To find out more about franchise opportunities with Tint World, visit tintworld.com or tintworldfranchise.com.