The tale of the nightmare boss

The tale of the nightmare boss 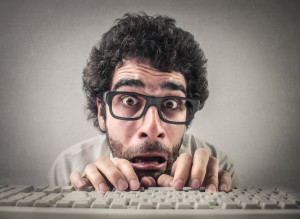 It comes out from the deep. It’s hairy. It’s scary. It fills you with terror and dread during every waking moment. It is …

It starts right when you arrive in the morning. No sooner do you put down your cup of coffee than Nightmare Boss is screaming in your ear. You’d better have those reports on his (or her) desk by noon! No, make it 11 o’clock. Then there’s ANOTHER set of reports he wants you to have on his desk by noon. Lunch break? You think you deserve a lunch break? Where do you think you are – on vacation?

The reports are done (both sets). You had to kill yourself to do them and your stomach is growling like a wild animal, but they’re done. Then, Nightmare Boss calls you into his office. You call these reports? I wouldn’t use these to line my birdcages. Do them over – ALL of them. I don’t care if you have to stay late – again.

You’re riding home in the car, bleary-eyed after what seems like another million-hour day. You can’t take much more of this. It’s far past dark. You haven’t eaten in 12 hours. Your doctor says you’re on the road to an ulcer. It’s official: if you don’t do something fast, Nightmare Boss is going to spell your doom.

Just before you pull off the highway to your exit, you spot a billboard. “Buy your own franchise,” it says. “Then, you can be your OWN boss.” Now there’s an idea. You’ve always thought you had what it takes. You have a little capital saved up. You’d never have to deal with Nightmare Boss again – and you certainly would be a better boss than he is.

So what are you waiting for? Give your story a happily ever after: be the boss of your own franchise today.