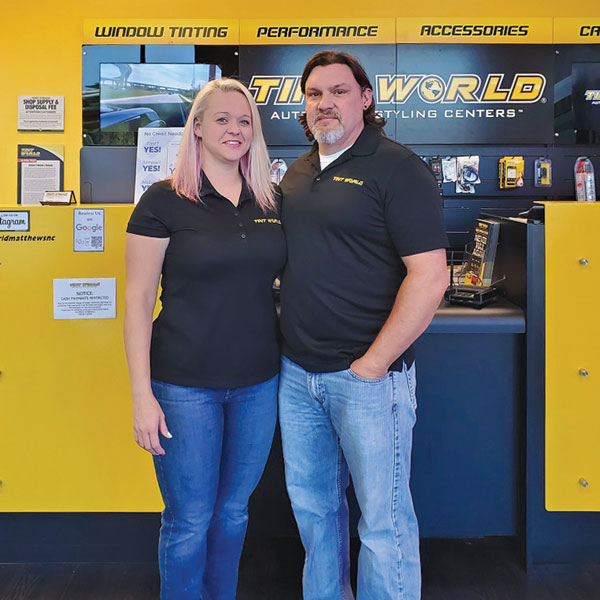 Despite facing adversity, Roy and Erica Morelock, with the support of their Tint World team, were able to relocate their business and come back stronger than ever. In fact, even after struggling through some unexpected challenges, the Morelocks were able to exceed new store revenue goals by a landslide. By Cindy Charette

Despite facing adversity, Roy and Erica Morelock, with the support of their Tint World team, were able to relocate their business and come back stronger than ever. In fact, even after struggling through some unexpected challenges, the Morelocks were able to exceed new store revenue goals by a landslide.

The couple opened their first Tint World franchise in Roy’s hometown of Kingsport, Tennessee, but little did they know where this adventure would lead. After several months of growing their new business, the Morelocks were faced with the closing of a nearby shopping mall, which resulted in a huge, negative impact on the community and local job market. In addition to having this setback, and through no fault of their own, a small fire broke out in the restroom of their building. Thankfully, nobody was injured, and the fire was contained quickly. However, although the flames did not get past the fire-
retardant door, the HVAC system had blown smoke throughout the store. The Morelocks had to close operations for two weeks to conduct a thorough cleaning before allowing staff and customers back into the building. To make matters even worse, the Morelocks’ insurance company then denied their claim because of a technicality.

After having such a difficult start, the Morelocks, being true entrepreneurs, did not give up on their dream. They reached out to Tint World’s headquarters with their proposal of closing the Tennessee store and relocating to another state closer to Erica’s family. Since Charles Bonfiglio, owner of Tint World, is passionate about seeing his franchisees succeed, he was completely supportive of the idea. Both he and his team, along with the Morelocks, proceeded to move forward with opening a new Tint World in Charlotte, North Carolina.

Jeff Stark, COO of Tint World, was able to negotiate a termination from the Kingsport building lease. Bonfiglio also froze their royalty fees so the Morelocks could get a head start on re-opening in their new location. When asked to describe how Tint World helped with their move, Roy replied: “They were completely supportive and willing to help in any way they could with the transition. Jeff was involved in every aspect of the relocation.”

Despite what came along next, which was COVID-19, the Morelocks still persisted. Roy had designed and constructed their first store himself. He built upon that experience while designing and constructing his next store, which resulted in an even more impressive build-out. Finally, in July of 2020, the North Carolina store opened its doors to a larger and stronger market. Tint World of Charlotte received a welcoming reception from the community, and residents were excited to have them in their area. A typical Tint World franchise breaks even, on average, in approximately six months. However, the Morelocks’ new location hit their break-even point in only two short weeks.

Although it took a lot of hard work, courage and tenacity, the Morelocks continue to see revenue growth, and they feel their decision to relocate and start over was well worth their efforts. They are also grateful for the support and leadership they received from Tint World’s headquarters. In franchising, you are in business for yourself but not by yourself.

This is the kind of franchisor you want behind you and your business.